Travelling to Ha-Makoae, a poem by Rethabile Masilo

This would be our father’s last time to the home of his birth.
Near the road’s edges a monitor flicks its tongue at us,
licks its lips, then twists from side to side to cross the route
like someone carrying heavy loads in each hand.
Dad pushes our Datsun slowly up with its own heavy load
of us, and goods: meat, carrots, melons, toys and clothes.

We reach the family summit at the end of the climb,
red soil, dark with dampness; graves of those who lived
in caves and ate people, deep in a south summer
where a sun grazes the glade below with light, and spill
from the car, leaving it with its mouths open, and yelp
around the village to bring the neighbours out.

Later, when the gifts are splayed like a carpet in the yard,
men stab a bull for nourishment; women steam bread
in three-legged pots; we know that after this happiness
it’ll be another year before we flee the city again,
and drive up here to gather in this village to gain
enough strength to face the anger of the cities below. 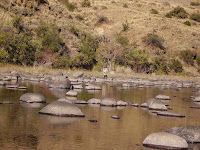